All Collections
FAQ
Configuration
What are Forms, Fields, Transactions Forms in Sisu and how do I use them?

What are Forms, Fields, Transactions Forms in Sisu and how do I use them?

Forms create efficiencies in gathering and viewing transactional data in Sisu. They can create some very strong workflows.

Written by Zac Muir
Updated over a week ago

If you want to geek out with us, read these few paragraphs about why forms are so powerful. If you just want to know how to use forms, skip to the next section.

One of the common workflow inefficiencies that we've seen in talking with hundreds of teams and brokerages is the way that data is shared between agents and the admin/transaction coordinators.

There is usually a point where data needs to be transferred between the two parties—for example, when an agent signs a listing, they need to submit data to a transaction coordinator who assists with uploading it to the MLS, marketing tasks, etc.

Let's break down that scenario.

The archaic workflow would be to blast information about the signed listing to the transaction coordinator in an email and hope that it gets taken care of.  A slightly more modern process would involve a forms tool (such as Google Forms or WuFoo Forms) which require certain fields and at least put the data into a standard format.

Both of these processes carry certain inefficiencies:

How to use forms in Sisu

Think of a form as a window into the database for any specific transaction. They are useful for an agent to submit data to the admin team, as well as for an admin to create certain views of the data that cater to their workflows.

I can see the forms that I have set up from admin>team settings>forms and fields. 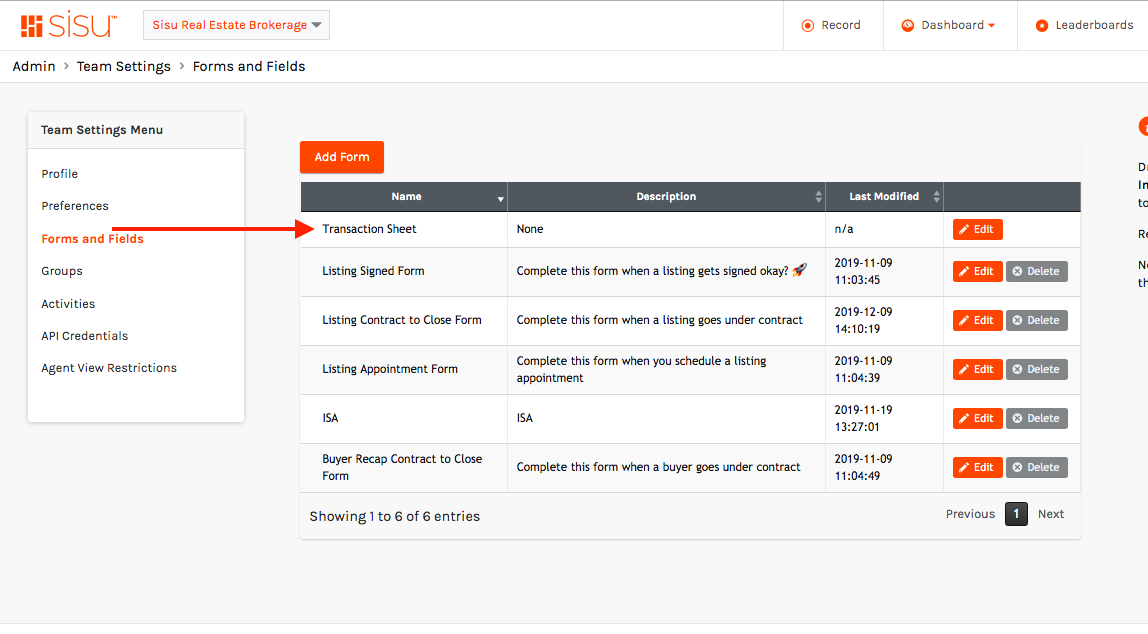 This screen reflects the transaction sheet, which you can set up here

When you first check out this screen, you'll likely notice a handful of other forms. These are suggestions and examples that we've compiled from other teams in the industry. You can delete and modify them as needed, but they give you an idea of what type of forms can be used. 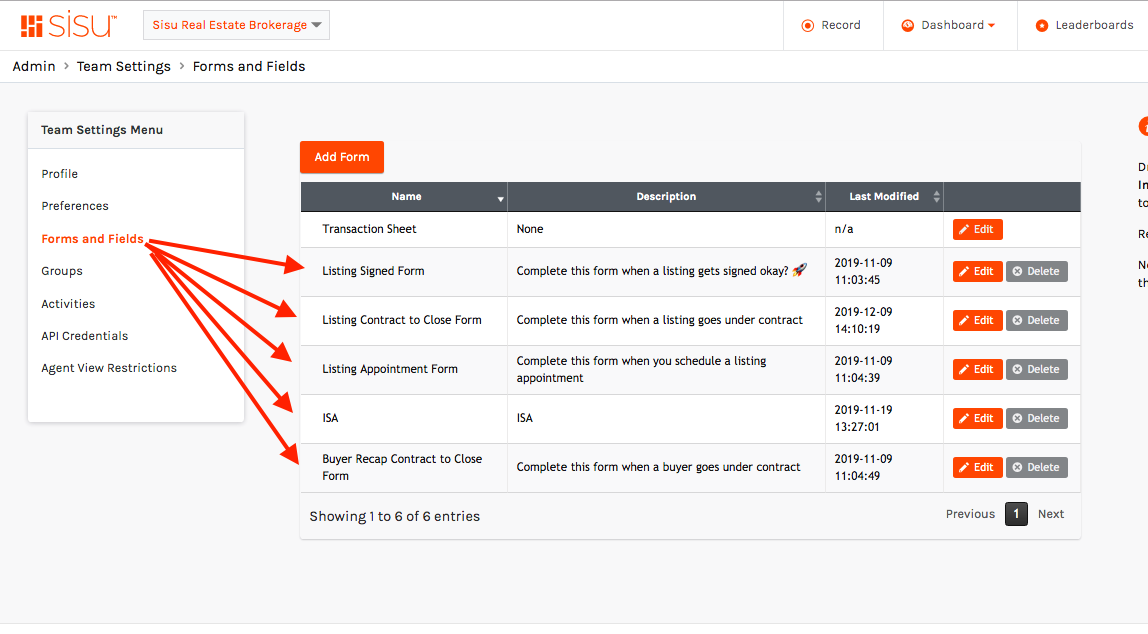 Basically, any time where you need an agent to report data to the administrative team could be a great use case for Sisu forms.

Setting up your forms

When you click edit, you'll have a header at the top to edit the basic features of the form. You can change the name and the description.

The "edit only" box means that the form will only be able to edit an existing transaction. It assumes that the transaction already exists in Sisu, so it allows you to remove required fields such as the client's first name or last name (because these have already been entered previously.)

Adding new fields to your forms

You can use the arrows to add in new fields and rearrange the order that the fields appear in.

You can also mark certain fields as "required". This means that the form will not update until required fields are entered, which can be useful for ensuring data integrity.

When your agent clicks "edit" on a transaction:

It will pull up that specific transaction and all its associated forms: 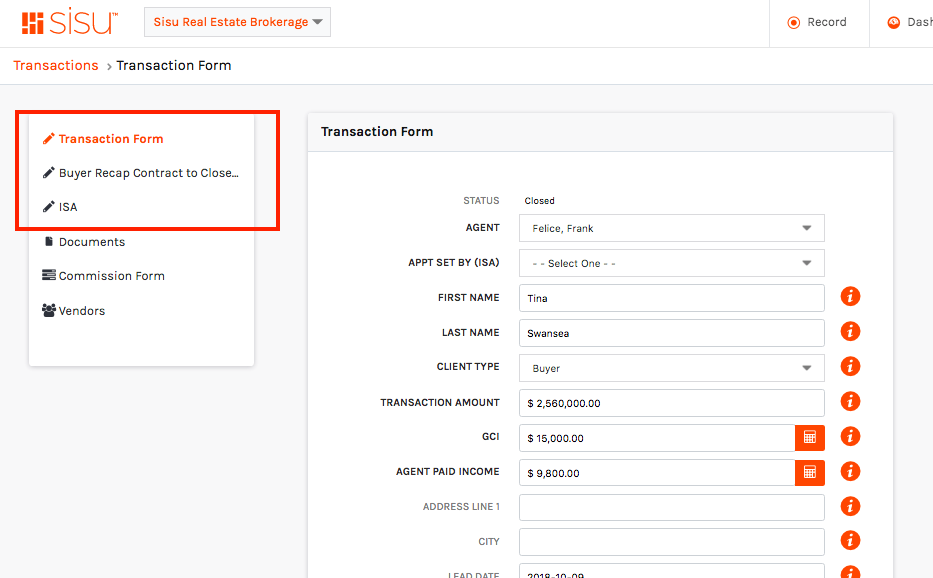 Notice how the values on my "Transaction Sheet" automatically appear on my "Buyer Recap Contract to Close" form: 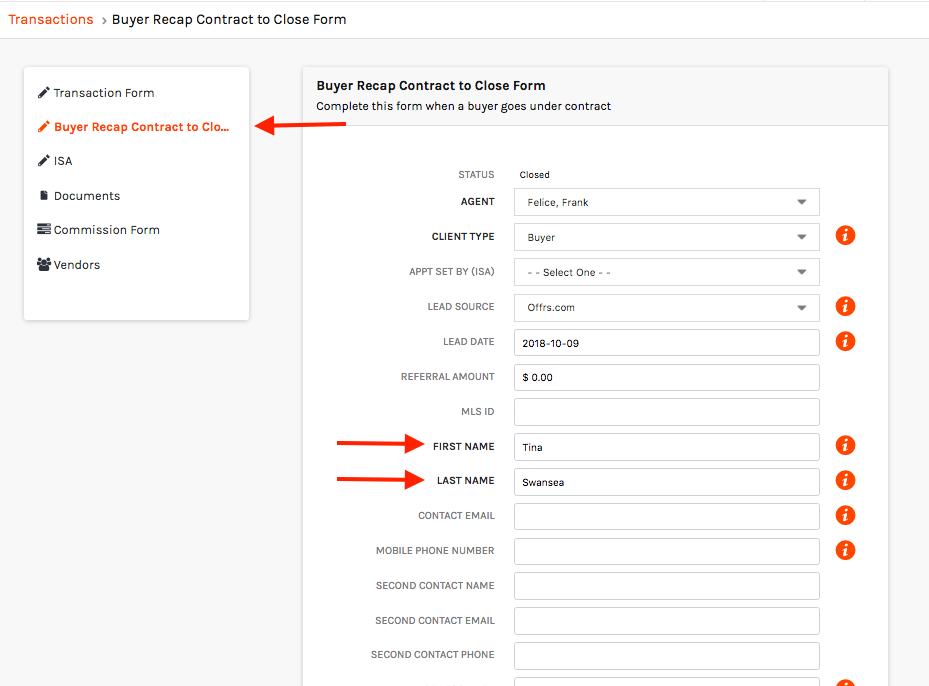 This saves time when filling out the forms, because a field will never need to be entered more than once.

I finished my form... now what?

Once your form is complete and you hit "submit", the data will be stored in the database.

If you have notifications set to trigger off certain date fields, these will automatically send an update to registered parties (i.e. I might set up a notification under admin>notifications to go out to my admin as soon as the "signed" date on a listing is filled in.  As soon as the agent submits the form, the admin will receive that notification.)

You can also manually send out a copy of this form to whoever may need to be involved with it—for example, an administrator, transaction coordinator, or a vendor partner (such as a lender).

I can do this by clicking "Send Form Data":

The "Send Form Data" option populates the entire form into a template that I can modify and then send out: 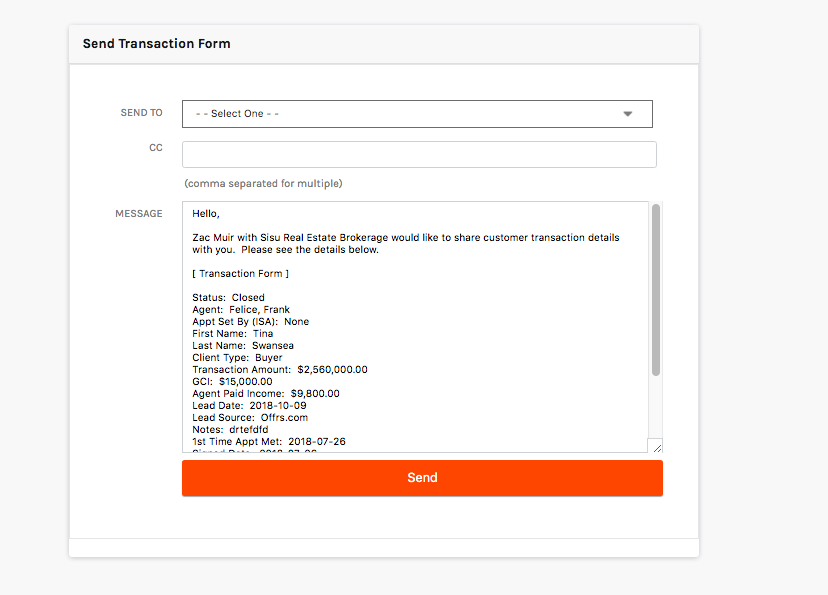 I can even attach documents if I've uploaded them in the "Documents" section on the edit transaction screen.

Did this answer your question?